The European Council President Herman Van Rompuy visited Mali on February 19 and was introducted to the EU training mission (EUTM). EUTM Head of Mission General Bruno Guibert introduced Cynthia Petrigh, in charge of the International Humanitarian Law (IHL) training for the Malian troops, to the President.

The 700 trainees will spend 10 weeks in the training session.

This multi-annual research and policy project is geared toward developing capacity building measures and practical methodological tools for practitioners engaged in monitoring, reporting, and fact-finding (MRF) mechanisms. To this end, HPCR has engineered the Harvard Group of Professionals on Monitoring, Reporting and Fact-finding, a collective of high-level MRF practitioners that will convene over the coming years to guide HPCR’s research and policy initiatives in the domain of MRF.

Théo Boutruche holds a PhD in International Law from the Graduate Institute of International and Development Studies (Geneva) and from the Aix-Marseille Faculty of Law (France).  He is currently the Post-Conflict Legal Adviser at REDRESS in London.  Previously, he worked as the Amnesty International Researcher on the Democratic Republic of Congo at the International Secretariat in London and as the IHL/Human Rights Expert for the Independent International Fact-Finding Mission on the Conflict in Georgia created by the European Union.  Also, as a consultant in international human rights and humanitarian law, he has worked for various NGOs, including Save the Children and the Diakonia IHL Programme.  He has published several articles and book chapters on international law related issues, including transitional justice, fact-finding, the protection of civilians in times of armed conflict, and the regulation of means and methods of warfare under IHL.  His PhD thesis, “The Prohibition of Superfluous Injury or Unnecessary Suffering in International Humanitarian Law,” was awarded the 2009 ICRC Paul Reuter Prize on International Humanitarian Law.

Luc Côté has been a Criminal Law attorney for nearly 30 years, the last 20 years in International Criminal Law.  In 2001, he graduated from the Higher Institute of International Studies in Geneva.  He worked in international prosecutions (Senior Legal Adviser with ICTR for 4 years, Chief of Prosecutions for the Special Court for Sierra Leone for 3 years).  Following that, he acted as Executive Director of the UN Independent Special Commission of Inquiry for Timor-Leste (2006), the UN mapping exercise conducted in the DRC (2008), and the Independent International Commission of Inquiry for Kyrgyzstan (2011).  Since 2006, Mr. Côté has worked as a consultant with the UN and NGOs on transitional justice and on investigations and prosecutions of crimes against international criminal law.  He worked on projects in Kenya (for Somalia), in Bosnia, in Haiti, and in Lebanon.  He is currently involved in projects in Tunisia, Libya, the DRC, and Ivory Coast.

Hina Jilani is a human rights activist from Lahore, Pakistan.  From 2000 to 2008, she served as the Special Representative of the United Nations Secretary-General on Human Rights Defenders, for which she undertook visits to numerous countries, including Angola, Indonesia, Israel and the Occupied Palestinian Territories, Kyrgyzstan, and Serbia.  She also served as a Member of the United Nations Fact-finding Mission on the Gaza Conflict in 2009 and on the International Commission of Inquiry on Darfur from 2004 to 2005.  She is one of the founders of the Human Rights Commission of Pakistan and of the Women’s Action Forum.  In 2008, she was the recipient of the American Bar Association’s International Human Rights Lawyer Award.

Philippe Kirsch recently served as the Chairperson for the United Nations Commission of Inquiry on Libya and as a Commissioner for the Bahrain Independent Commission of Inquiry.  He served as Chairman of the Committee of the Whole of the Diplomatic Conference of Plenipotentiaries on the Establishment of the International Criminal Court in 1998 and as the Chairman of the Preparatory Commission for the ICC from 1999 to 2002.  Subsequently, he served as the first president and as a judge for the ICC.  He has also been engaged in the development of international criminal law related to terrorism and has served as Chairman or President for several international conferences addressing this issue  His numerous Canadian Government positions have included Assistant Deputy Minister for Legal, Consular and Passport Affairs, Ottawa (1995-1996) and Deputy Permanent Representative of Canada to the United Nations (1988-1992).  He recently presided as an ad hoc judge over the Belgium v. Senegal case for the International Court of Justice.

Beatrice Mégevand-Roggo holds a masters in Political Science (contemporary history and international relations) from Università Statale in Milan (Italy).  After working as an assistant professor at Università degli Studi, as a free-lance journalist, and as a consultant to NGOs for the assessment/monitoring of development projects in several countries in Africa and Latin America, she joined the International Committee of the Red Cross (ICRC) in 1987.  She worked in a wide range of regions, including Latin America, the Balkans, the Caucasus, Africa, and the Middle East.  Her most recent assignments with the ICRC were Regional Director for Europe (including Russia and the Caucasus) and the Americas (including Guantanamo and Haiti, etc.) from 2002 to 2006, and Regional Director for the Middle East from 2007 to June 2012, when she retired from the ICRC.

Cynthia Petrigh has been working in the field of Human rights, IHL, and peace processes for the past 19 years.  Her international experience includes setting up a rehabilitation center for victims of torture (as Executive Director of Centre Nassim in Beirut), teaching (as Director of the refugee law courses at the International Institute of Humanitarian Law in San Remo), and supporting peace processes (as Director of Policy and Comparative Learning at Conciliation Resources in London).  She directly participated in MRF missions as a Human Rights Expert for the Kyrgyzstan Inquiry Commission and as a Human Rights and International Humanitarian Law Expert for the International Monitoring Team in Mindanao.  She has authored several articles on the Middle East, on displacement, and on Islam and peace. 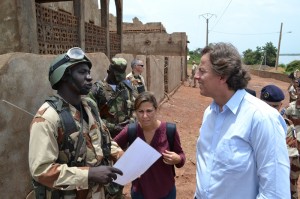 Visit of Mr. Koenders in Koulikoro

On Friday, August 16th, Mr. Albert Gerard Koenders, Special Representative of the Secretary General of the United Nations in Mali and Chief of the United Nations Multidimensional Integrated Mission for Stabilization in Mali (MINUSMA) went to Koulikoro training camp, attending the invitation of General Guibert, head of the European Union Training Mission in Mali (Mali EUTM), in order to assess in the field the results of the mission and to meet Malian soldiers and European instructors of EUTM Mali. 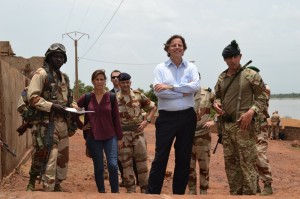 After being welcomed at the shooting range of Tientienbougou by colonel Testart, commanding officer of Koulikoro training camp, and Lieutenant-Colonel Samaké, commanding officer of the Malian battalion « Elou », Mr. Koenders and general Guibert attended a shooting session of Malian soldiers from the 1st infantry Company. The visit continued to the combat village of Koulikoro, where Mr. Koenders attended the urban combat training of the 2nd Malian company and could exchange views with Mrs. Cynthia Petrigh, international humanitarian law instructor.

The visit ended with the visit of the Malian camp of the Elou battalion, where Mr. Koenders was welcomed by Lieutenant Colonel Traoré, commander of the Malian training center « Boubacar Sada Sy » in Koulikoro. Finally, Mr. Koenders could measure the advanced of the mission, notably through his exchanges with the Malian officers and soldiers. This visit hereby contributed to reinforce dialogue and mutual understanding between EUTM Mali and MINUSMA, two missions which perfectly illustrates complementarity and co-ordination of the international community’s action in Mali.