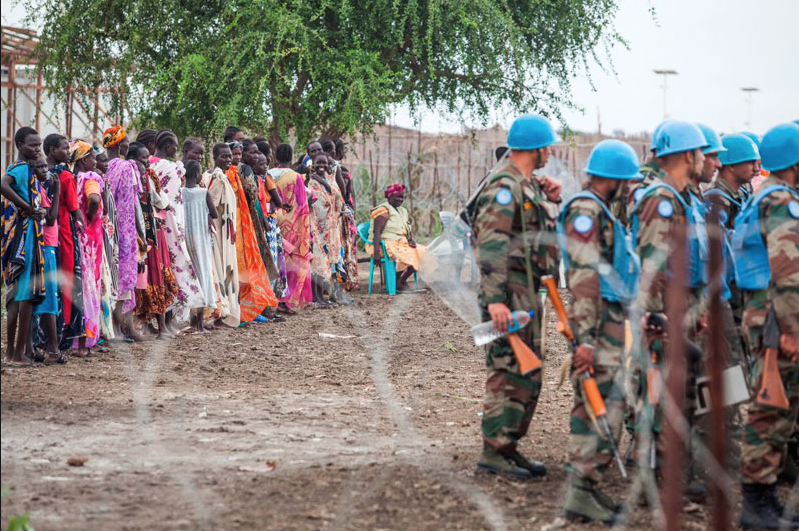 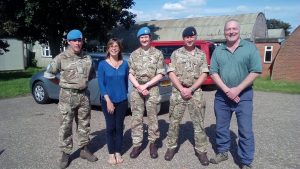 No country has reached what Johann Galtung calls « positive peace ». Peace is a long-term objective for any society. A number of steps and actions can however help us move towards a higher level of justice and enjoyment of rights – with a long-term vision for an inclusive and positive peace.
Today, we can contribute to diminishing human suffering, and to building the right environment for future societies at peace, by upholding and disseminating the international norms that protect human life and human dignity.
To this effect, we provide training and advisory services to armed forces, peacekeepers and non-state armed groups on International humanitarian law (IHL), prevention of sexual violence and compliance with international norms. In order to put an end to abuse and raise awareness about rights, we provide expertise in monitoring and investigating human rights and IHL violations, gender-based violence and international crimes affecting children. We accompany societies in transition by supporting mediation efforts, dialogue initiatives and women’s participation to peace processes. We share our comparative experience and our field-based evidence in policy and advocacy events and publications.
Beyond peace Pte Ltd is a Singapore based company established in 2012.
Our Founder and lead consultant Cynthia Petrigh is an experienced international expert in human rights, peace and security. After a career as a humanitarian worker working with refugees and victims of torture (as a Head of Mission for the Danish Refugee Council, the Executive Director of Centre Nassim for the victims of torture; or the Director of the Refugee Law Course at the International Institute of Humanitarian Law in Sanremo), she dedicated her work to addressing the root causes of violence through conflict analysis, conflict resolution, and training of combatants. She shares her vast field experience with governments, NGOs and academia, through conferences, workshops, training events and publications.
Cynthia Petrigh is a member of:
– The PSVI Team of experts (UK Government)
– The International Institute of Humanitarian Law, Sanremo
– The Harvard group of Professionals on Monitoring, Fact-Finding and Reporting
– The Board of Open Edge (NVC)
– The OSCE mediation and dialogue roster
– Women in International Security (WIIS)
– Social Development Direct

Our clients include:
The UK government (training UK forces and contributing to military joint exercises)
The EU (designing and implementing the LOAC/PSV component of EU military training missions)
The United Nations (conducting and training on conflict analysis)
The OSCE (support to mediation)
The San remo International Institute on Humanitarian Law (training on refugee law and on gender-based violence; speaking at the round-table on current issues of IHL)
The US Africa Command (training African Commanders on Accountability in peacekeeping missions)
The International Committee of the Red Cross – ICRC (training humanitarian professionals on IHL and non- state armed groups)
Beyond peace works on our own projects and accepts short-term and long-term consultancies with governments, the UN, the EU, academia and NGOs. For inquiries on working with Beyond peace, contact us.

The HPCR Advanced Practitioner’s Handbook on Commissions of Inquiry draws from past professional practice in the domain of monitoring, reporting, and fact-finding (MRF) and offers methodological considerations to inform future MRF missions.

Protection of Witnesses, Victims and Staff in Monitoring, Reporting, and Fact-Finding Mechanisms

Abstract
One dilemma that faces practitioners serving on monitoring, reporting, and fact-finding (MRF) missions concerns the protection of witnesses, victims, and staff. The paradox underlying the issue of protection is that, while statements from witnesses and victims account for the predominant evidence when investigating human rights violations, the very fact that victims and witnesses decide to come forward and contribute to the establishment of the truth can put these individuals at risk. Another dilemma emanates from the ad hoc nature of such missions, in contrast with the need to ensure protection on a long-term scale. In the often-volatile contexts in which MRF missions typically operate, security risks also arise for MRF staff members participating in on-the-ground operations. This paper analyzes how past MRF missions, whether commissioned by ad hoc bodies or by the UN, have grappled with these risks. The paper examines the sources of the obligations to protect witnesses, victims, and staff; the nature of the threats that could arise; the protective steps that have been taken; and the measures that could be taken by MRF professionals in the future. As this paper demonstrates, often a divide exists between aspirational notions of best practice and the reality of what can be delivered, leaving MRF practitioners frequently uncertain about the lengths and limits of their protective responsibilities.